What Motorcycle event have you attended last?If not you should.Below article talks about Sultans of Sprint a European Motorcycle Event.

The Sultans of Sprint is a get-together of bikers all around Europe with the sole aim of showing their skills with their custom sprint bikes that are powered by 4 stroke air cooled cylinders. Normally, we would expect that since it is a biking event, con-testers (Sultans of Sprint) will be ranked according their speed, performance and power, but there is more to that.

In order to be the acclaimed Sultan, you’ve got to add more to your game in terms of style and creativity in general because all of that will be rated as well. Even the painting on your bike will get bonuses too. Why Benelli 300i is significant in India?

The bikes that are used to participate in this competition are 1000% custom made. The reason simply being, every rider has a skill set which are unique to themselves. No rider’s talent will be identical to another’s. So every bike is customized so as to suit the biker’s talent. Moreover, it has been proven that the default settings of bikes with air cooled engines will be no match to the customized ones.

This idea was nurtured by the renowned biker, Sebastien Lorentz who had a passion and craving for speed and was always after competition. 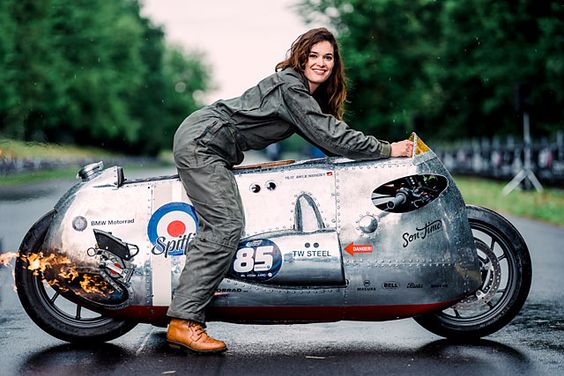 As far as technical specifications are concerned, it has already been mentioned that the Sultans of Sprint challenge is meant for those bikes that have 4 stroke air or oil cooled 2 cylinders’ engine. In order to keep the game clean and fair, depending whether the engine is a two valve or a four valve, there are upper limits to their capacity that are not to be surpassed for any given bike.

Considering the fact that this is a speed-loaded biking event, a couple of safety rules have been set aside in order help assure maximum safety.

● Brakes: It obligatory for every participating bike to have braking systems on both wheels.
● It also advisable to have all the bike’s oil drain plugs have safety locking wires.
● For the safety of the bikers, they are supposed to put on full leather suits, ( either two pieces or one piece), as well as Electronics Communication Engineering (ECE) face helmets coupled with the gloves and the boots that go with them.The Race Proper

In the race proper, there are two racing classes:

i. Sultans of Sprint “FREAK CLASS” : The bikes meant for this class of races are the oil or air cooled four stroke engines with a capacity that goes up to about 1600 cc. The racing equipment you most often come across in this racing class are, square drag-slick, lowered chassis, oxyde injection and super chargers.

ii. Sultans of Sprint “FACTORY CLASS”: The bikes meant for this class are air cooled or the water cooled four stroke engines. It should be noted there is no limit as of what concerns the engine capacity but the is a power ration which the bike is expected not to exceed.

This is the most challenging part of it all given that practically every aspect of the game is taken into consideration. In as much as the performance of bikers is rated, their style and creativity is rated too.

To begin with, their participation is voted online.

There are 5 bonus points that go for participation in every event as well as another 5 bonus points for the team mascot for each event and then 10 point for each winning round. The first, second and third places take 35, 34 and 33 points respectively. For the last vent, these points double.

Emflux One next big thing.

There is also the party monster bonus that is awarded to the riders who succeed at the special challenge organized by the night life management crew. So these are definitely ten points that all teams could pocket.

There are also special awards that are meant to reward work, style, craziness and creativity of the participant & teams!

Electric Punch is here to commute